Getting off the train I arrived in a cold winter town with beautiful mountains all around.

After weeks of being more in the city and more indoors in Jasper, Alberta, I started my every day walking again. As I don’t have a car I have to reach every trailhead and grocery store by foot which is definitely more a gift than a burden here. I have time to think and get connected again to myself and what I’m looking for. 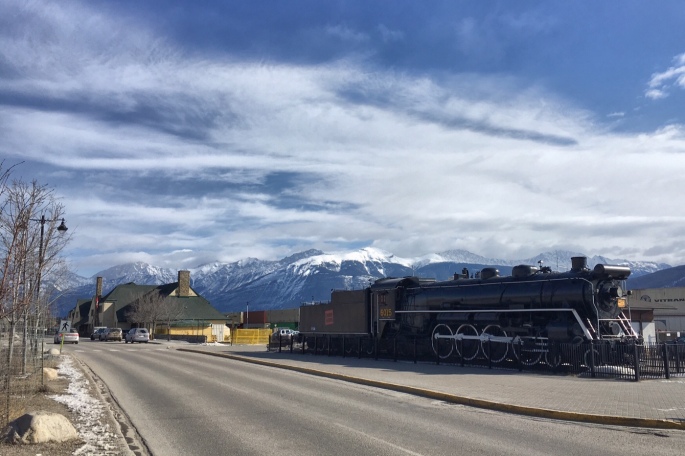 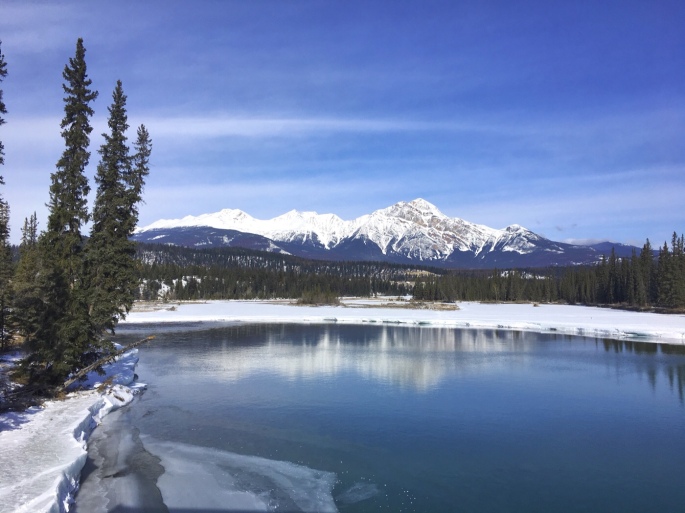 I did my first hike to the Old Fort point and in a loop around it. Including the walk from downtown I came to about 7 km which I booked for myself as a solid first hike with icy and slippery snow sections. Most of the time I was alone so I had my bear spray with me. Maybe that was a bit too careful as most of the bears should be still in hibernation but I felt way better with it out here. The little bells they sell in stores often close to the cashiers are “not loud enough and more a gag than helpful”, a couple of Canadian websites said. They recommended talking to each other. Or singing if you’re alone.

So I sang for nearly two hours. At one point all the good songs seemed to be sung and I realized that my brain started humming the dwarfs’ song from Snow White, Heigh Ho, and “Eisgekühlter Bommerlunder” – what my German friends might remember from their youth camp and field days – which is basically an endless song about two sandwiches and an ice cold drink that I realized years and years later was a strong liquor.

“Oh no.” I had to laugh about myself. But I couldn’t help it and so I let it happen until I reached the first people again at the end of the loop. 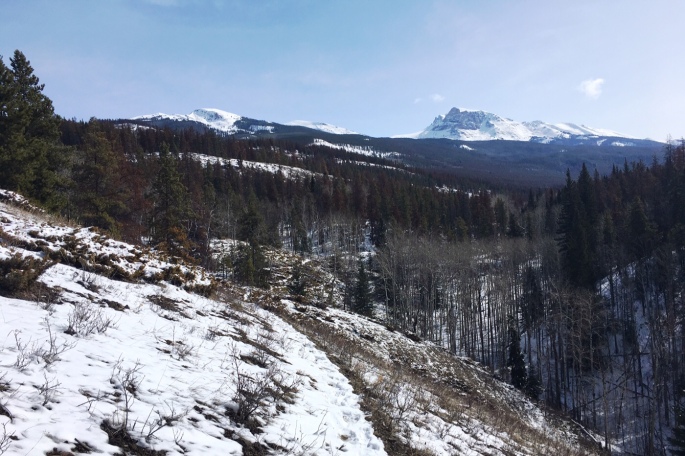 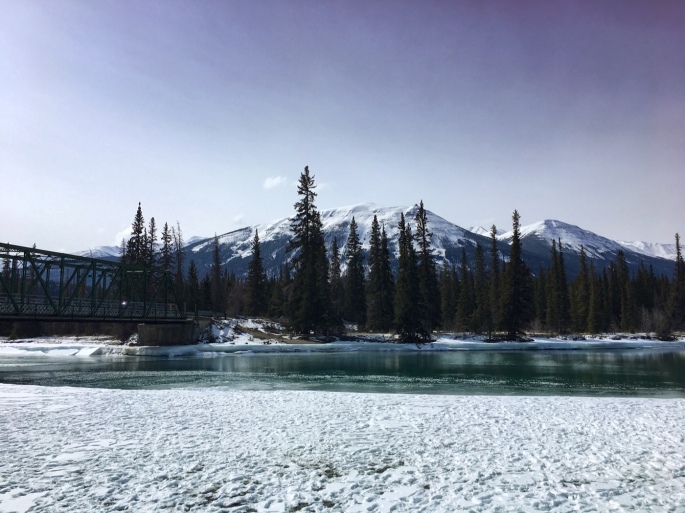 The second hike brought me north out of town to the Pyramid Lake. I really like that everywhere in Canada so far there’s always a nice path in the forest even if you practically just have to follow the road to your destination. It gives you the feeling of wandering freely in the wild and not trotting on pavement.

I have to admit that coming from warmer regions I didn’t think about the cold weather here and that the lake might not look like a lake… instead more like a white flat plain where people can walk, play and go cross country skiing on. And where the bridge to the Pyramid Lake Island is unnecessary til the ice begins to slowly thaw in a couple of weeks.

But for now ice and snow still cover the world even on a sunny day in a cold serenity. 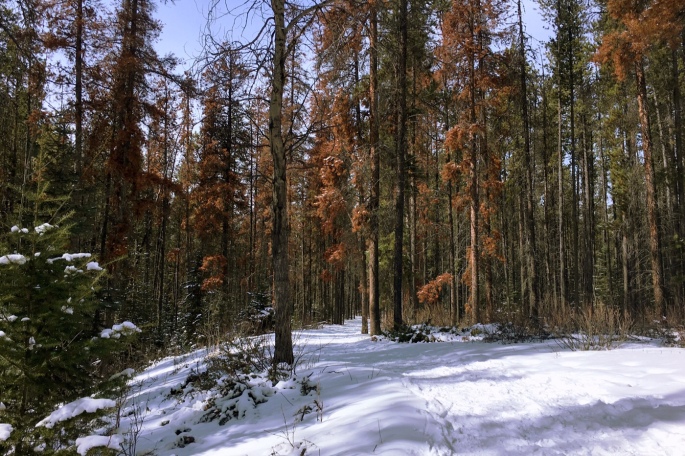 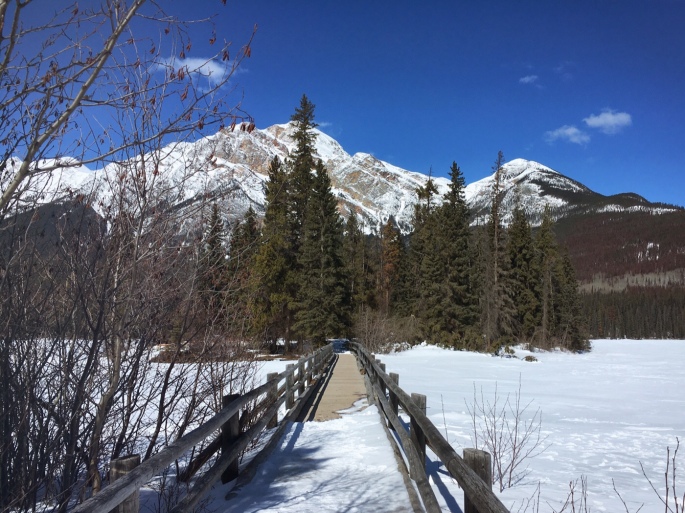 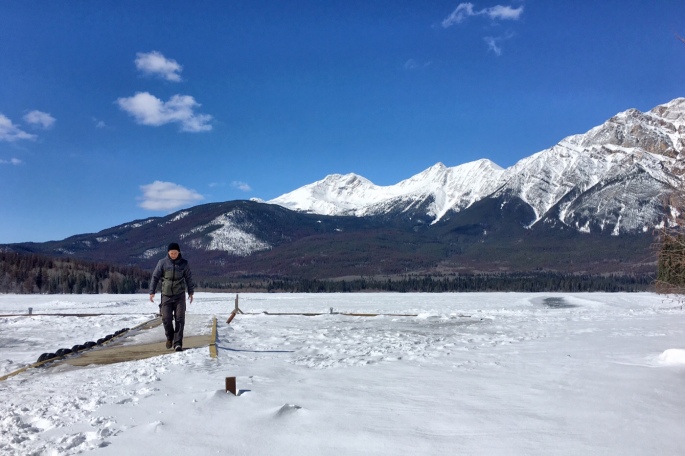 Out of town walk

An accidentally longer walk than planned along the rail tracks led me out of Jasper, along the river and close to the wilderness. When I started in the morning I had planned to return once I reached the town’s end. But then another and another interesting path opened up and suddenly it was just me and a couple of surprised animals. 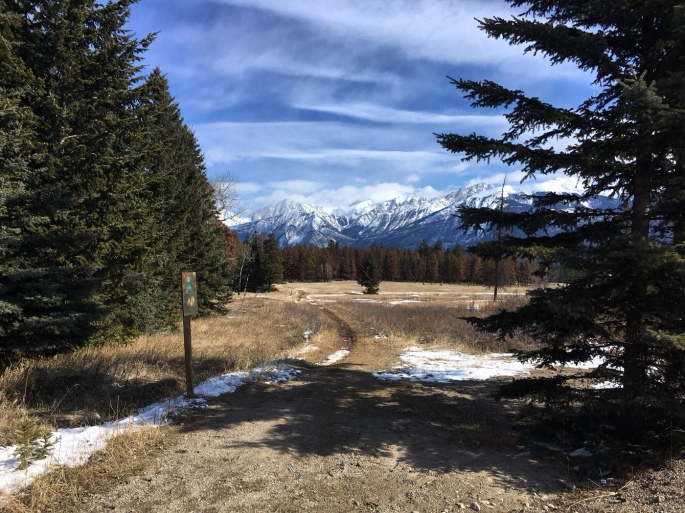 I met elks and deer which were confused to see me passing by and resulted in them hopping away – concerning deer – or just ignoring me while mumbling on the grass along the pathway – the elks. I’ve never passed these quite big animals in such a short distance before. And I really tried to look innocent and uninterested when I stayed on the path forward and back later on. Ok, one selfie had to be. 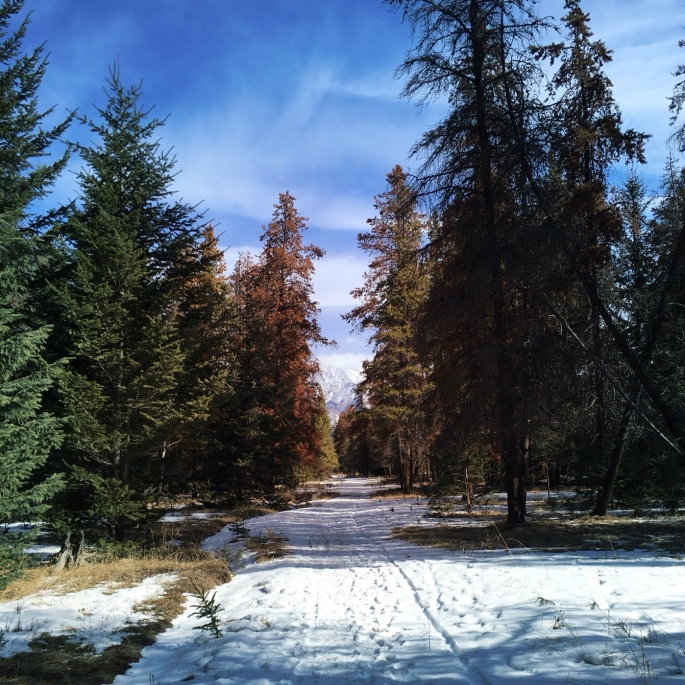 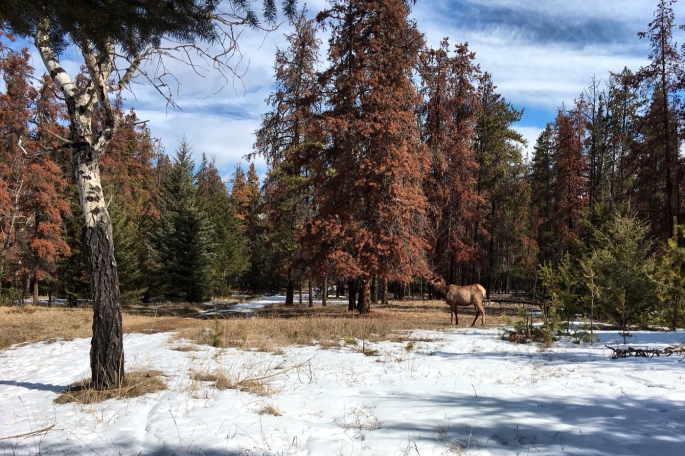 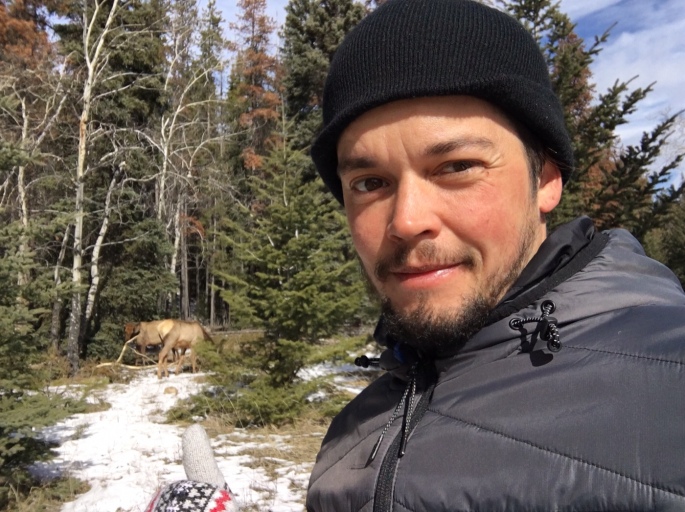 So I returned very hungry after 2 1/2 hours and treated myself with a well deserved Radler that included a free lesson about German history. 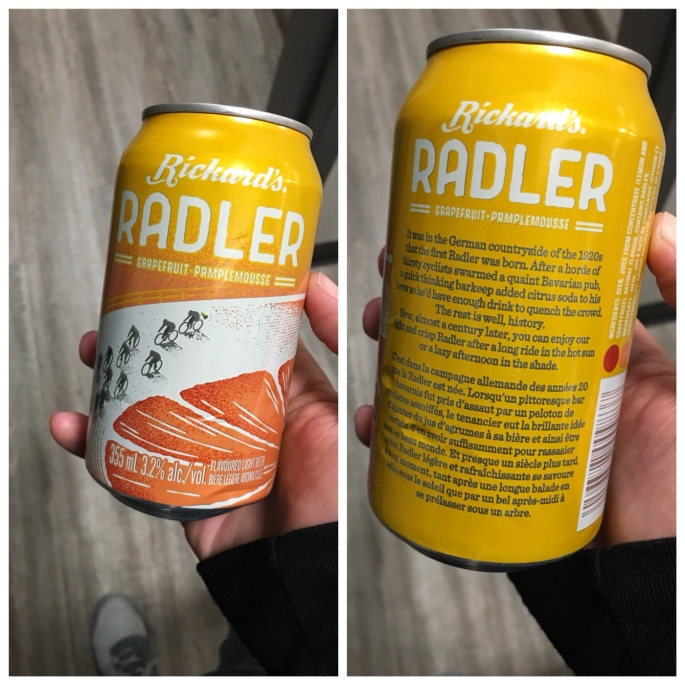 I was happy when I found out that there’s an activity center in town. Jasper has surprised me since I arrived for a couple of times. Not only because they have awareness posters and events all around about diversity and even their own Pride weekend. But also because it offers a lot even if you don’t have a car like me and arrive at the end of winter. So I dropped in to a pretty good fitness gym, a swimming pool and a hot tube for one entry ticket. That was my very first time going into a hot tube after working out. I think I can’t go back now and live without that anymore.

One of the intense personal experiences I made in Jasper: I was totally happy with what I was doing there, my walks and activities and self made lunch and dinner until I read in a tourist brochure of all the things that could be done with either a car or money. I suddenly felt pretty sad and unsatisfied with what I was doing. The same things I was so happy about a moment before. The thought spiral has started its game.

Minutes passed before I stopped in my tracks and realized how heavy I felt.

I don’t want to be unhappy just because I can’t do everything. No one can. And it’s easy to become unhappy if you’re just longing for what you didn’t do or can’t do right now. And it’s so beautiful just to be here and to do all the amazing little things.

I lifted my head – which is always a good thing – and let my eyes follow the mountains all around. What a beautiful place this is. 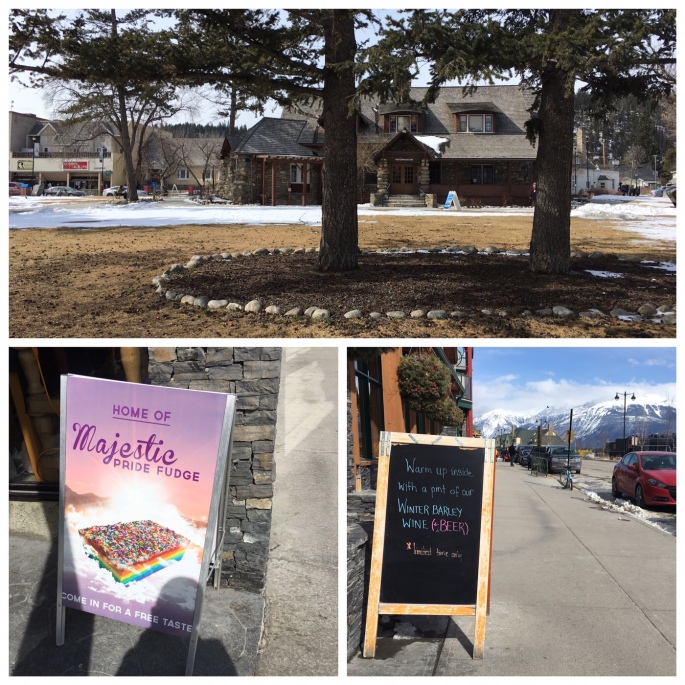 I closed my stay in Jasper with the second yoga class in my life. The first I had funny enough at a work meeting a couple of years ago and this was the second time learning more about breathing and flow.

„And when I meet you lining up at the post office I wanna see tree poses!” the yoga teacher gave us along.

Refreshed I’m off to Lake Louise!

Tonight I have to say goodbye to you, my old and loyal friend, Peanut butter.

We really had a blast during the last months and without you, PB, I wouldn’t have made it around Stewart Island or had the money for the cars on Hawaii. In Yosemite Park and in Vancouver you’ve been such a good friend to Bridget as well and never been jealous of her.

But tonight, here in Jasper, I think it’s time that each of us goes his own way. Just for a while. If we travel a bit longer together I fear that I would start to get angry at you, push you away and even say ugly things like „you don’t taste good at all“. So better have some space and travel onwards each for ourselves.

And I’m sure we’ll meet again.

Until then, farewell, my friend.