“You have to make a stopover in Sydney! It’s my favourite city in the world.”

I can still hear the voice of my brother in my head after I told him about my travelling plans. I have been told a lot of tips and stops that I „have to do“ since I talked to people about my plans. And til then I declined them all politely. But somehow this time it felt different and so I decided to give it a go.

That by then I would have two travel friends living in Sydney to visit – one from Iceland, one from the Camino in Spain – made the decision in retrospective a very good one. 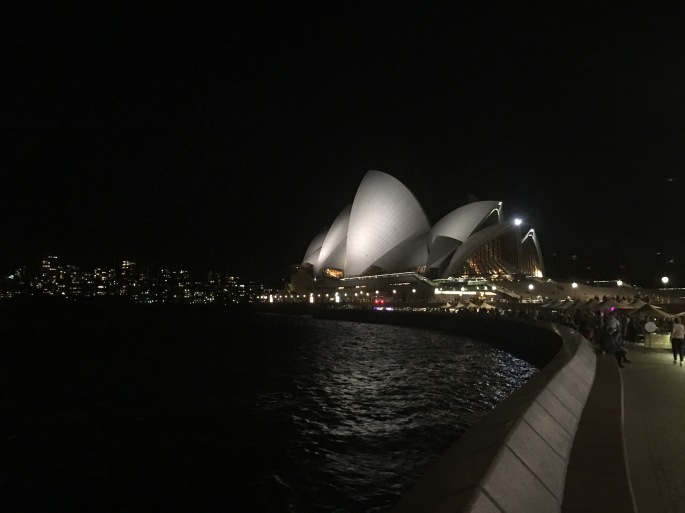 But how to properly start in a metropolis like this? Well, find a hostel that is not too expensive, has enough quite good ratings and is not too far from what you think will be a good base for your stay. And if you like tryout more. I tried three.

But before I could dive into my days on the Southern Hemisphere I had to get through three major tasks:

After these first hours at the airport – yes, I got through customs unharmed and I found food – being greeted in Sydney with a welcoming „Hey, where are you from? You sound like a South American, maybe Brazil?“ seemed like an interesting start.
﻿ 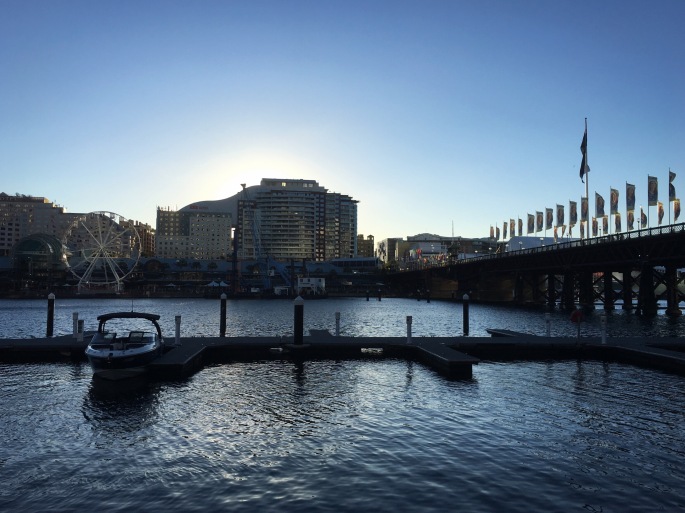 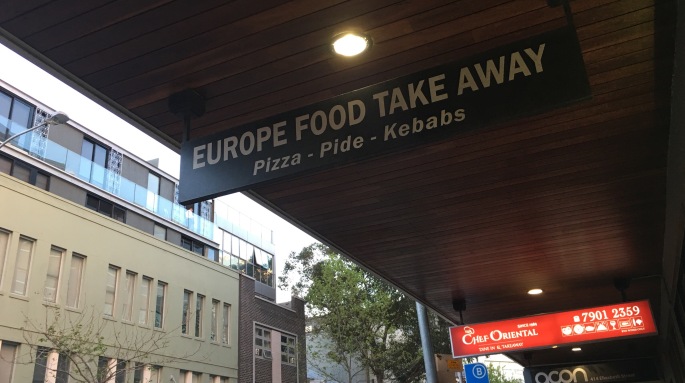 Hiking in the Royal National Park and the Blue Mountains

A long weekend of hiking with Karen along the Coast Track and in the Blue Mountains was ahead of me.

And one thing I relearned quickly: drinking wine and beer on one night but then forgetting to eat and to drink water afterwards accompanied by sleeping in a very stuffy room will always result in a headache.

So I had no excuses to cancel the walk with Karen in the Royal National Park south of Sydney and instead got up at 05:30, took my stuff and hopped onto the early train to bring me to Cronulla – and to hopefully get rid of that headache and nausea by the time I would reach Bundeena with the ferry. A breakfast for champions should help – mostly Coca-Cola. 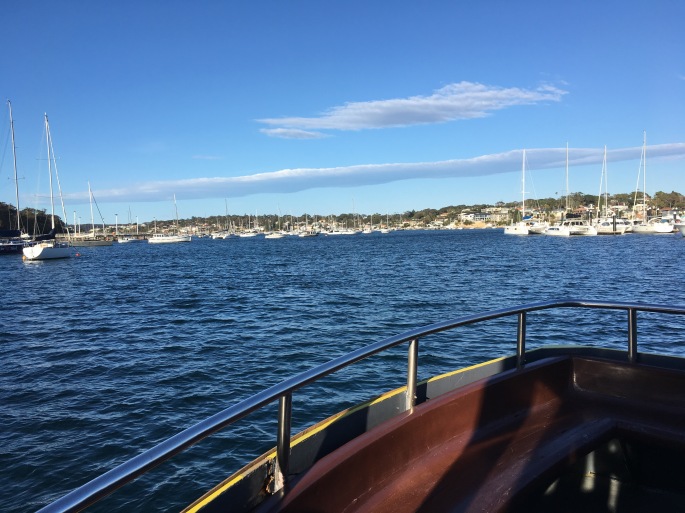 And of course we made it. The first part was mostly on a boardwalk, perfect to wake up, getting more rural and tricky after 2 hours. After walking through bushes, trees and along hidden beaches we arrived very hungry and with a 9 hours hike in our legs in Otfurt. In company of a new hiking mate from Germany (Jonas, I learned later on) who walked with us for about 3 hours.

We took the train to Sutherland – the closest town with possible open eateries – and had nice burritos and drinks in what seemed like the place to be that night. While eating I could go through all the things I’ve seen during the day. Especially the lot of animals with birds of all kinds, lizards, two wallabies and even my very first whale waving with his fin for me. Sadly no wombat, but there could be some around the camping ground I slept later on that night in the glamping trailer.

Newly learned item: BYO – an Australian invention/intervention? I learned about the possibility for restaurants which are not fully licensed that they can allow you to bring your own (BYO) alcohol. Is this except for New Zealand anywhere else on this planet possible? 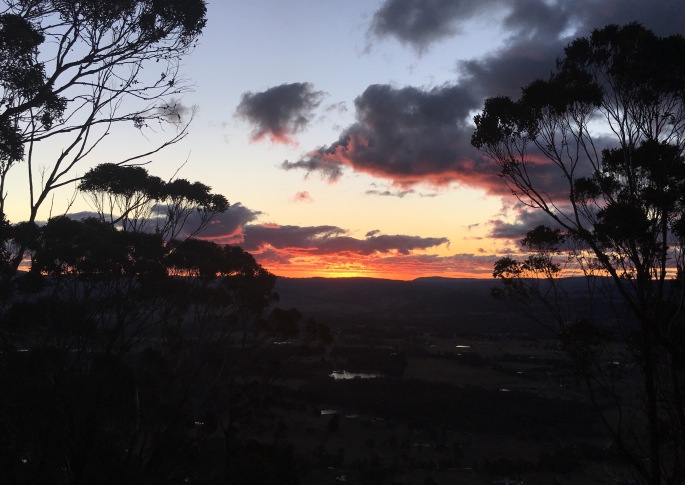 The next day I enjoyed bacon, eggs and Vegemite toasts in the camping grounds perfectly prepared by Karen. Since I slept in the rest of the day was just a little walk with the dogs and some pie in the sky before heading to Katoomba and our hostel for the night. 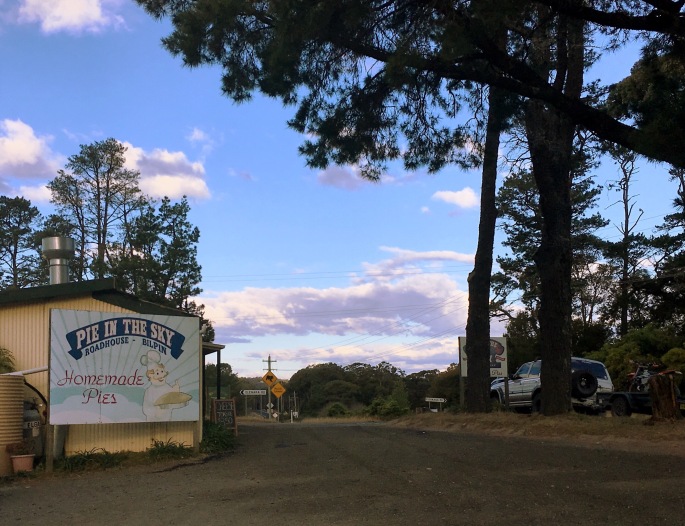 After a nice flat white and fruity waffle breakfast on a sunny Sunday morning our task was about to start: Have a short look at the touristy stuff in the Blue Mountains – like the three sisters – and then dive into the canyon on a non touristy hike.

It brought us through forests, along a little river, to a sunny lunch break on a rock and uphill underneath mist and over a lot of stairs.

During walking I got reminded by Karen that I should watch my step for snakes that might chill out on this warm and sunny path. This was the first time that I thought about what so many people said to me „Australia, the country where all animals try to kill you.“ But it never felt that way. 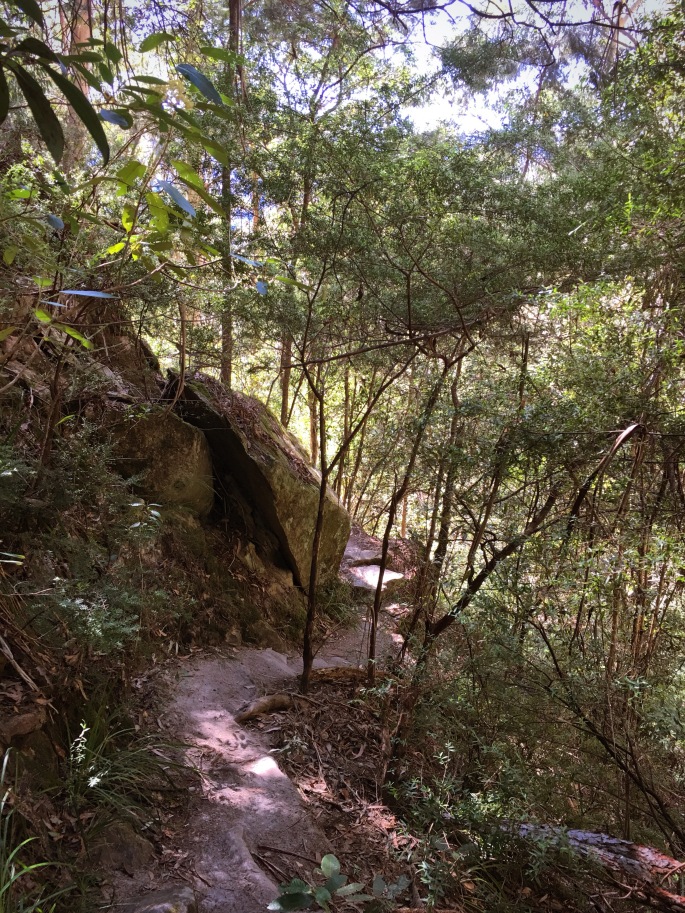 Concerning Vegemite: For what might be stereotyping or a prejudice that Vegemite is the Australian addiction,  I did some research on it. From the Australians I talked to 100% told actively without bringing it up that they would miss Vegemite abroad the most or couldn’t even get along without it for more than 2-3 months. Is this statistically significant? 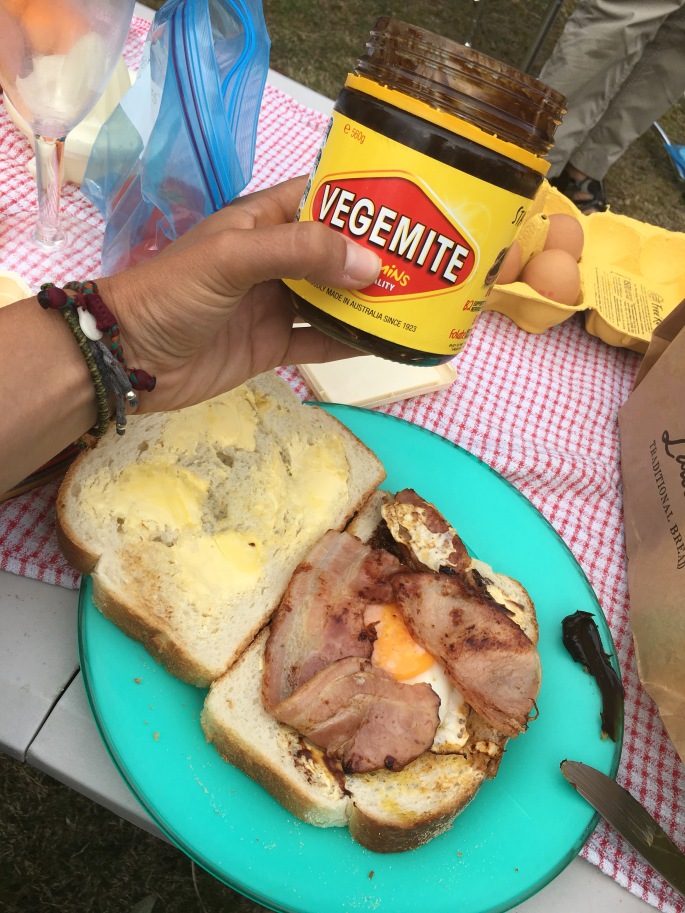 Back in Sydney and in hostel no. 3: Two guys in my room were sick. One was constantly babbling to himself in a weird language and spitting snot in some tissues in his bed. A Chinese family occupied the back of the room where the bathroom was. They made phone calls, watched tv on their phones and seemed to constantly shower why I waited over 60 minutes to get to the toilet.

I flew my dorm room on Monday and re-met Megan (from my Iceland tour) and we did the Bondi to Cogee walk (incl. return) along the beaches and cliffs of Sydney.

There are so many people doing stupid stuff that the beach of Bondi even has its own TV series – Bondi Rescue. I was tempted by this chance to get so easily into Australian tv.

And when we were on our way back a voice from behind called „Don‘t be scared, I’m not stalking you“ and it was Jonas who spent that day at Bronte Beach. Fair enough to say, I didn’t know his name until we hugged for this unforeseen reunion and introduced ourselves. Megan was visibly irritated. But no, Germans are not randomly happy to meet any other German with a hug. We changed numbers for a night out on Tuesday.

Have you ever seen crabs eating seaweed? I haven’t until I took the time and waited patiently at one of the rocky coastlines. 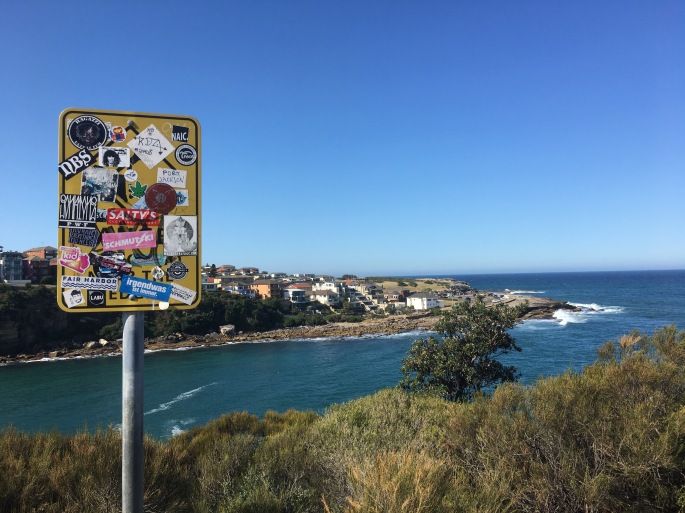 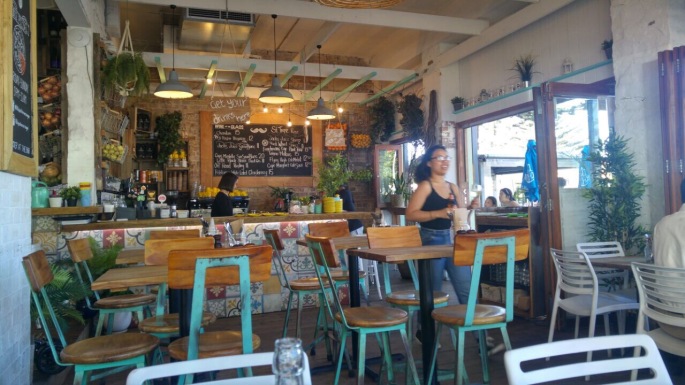 And it seems I missed my Singapore food diet very quickly so we headed to Spice Alley and treated ourselves with nice hawker style food and called it a night. 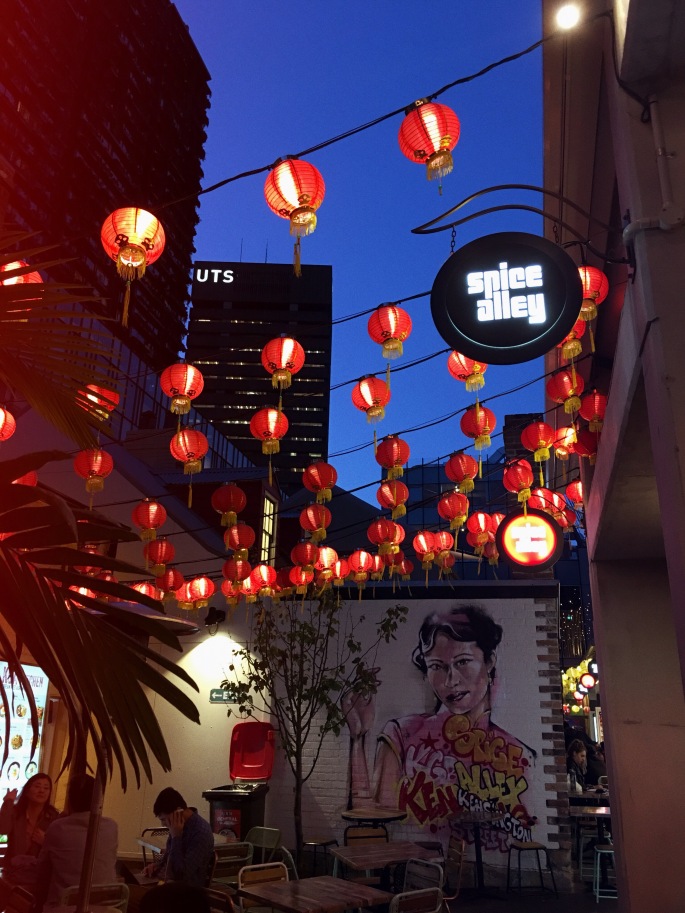 On my last full day – Tuesday – I felt like sports should do and I still had the Harbor Bridge run on my list. And since my dorm was still not very inviting to stay in I got up and after a short breakfast I was out and on the go.

​Side note: People in Sydney seem to know only two paces: Running very fast, which means literally everyone is overtaking me, or walking. I need this hypothesis to be fact checked.
On the other side of the bridge I found a nice flat white in a coffee shop and after resting for 10 minutes I decided to head to Manly with the ferry. In my runner‘s clothes. Which have been my sleeping clothes the night before. A thing that I would have never done in Germany. So my current state seems to be „defreezing and relaxing“. 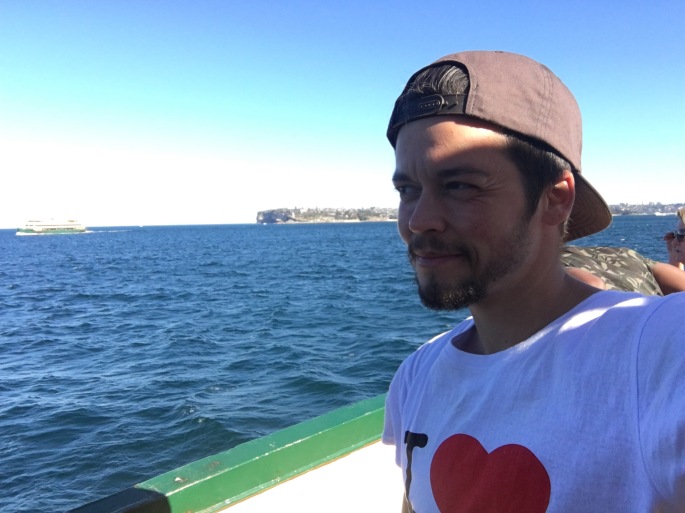 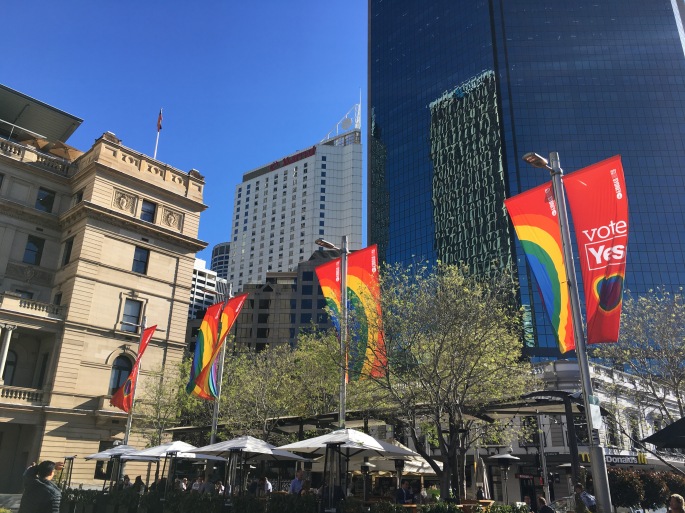 In the evening Megan and I decided to tryout a bar in Surrey Hills with a nice happy hour (= affordable wine and beer prices) and were joined by Jonas. So we spent the evening with good talks and a couple of drinks. A good way to say goodbye for now.

So I went hiking, had encounters with wallabies, connected and chatted with people and drank craft beers in Sydney’s bars – and finally updated my Across the Ocean playlist with a new song.

It hurts a bit leaving Sydney. It’s a wonderful city with wonderful people I got to (re-)meet and spend time with. It will be February until I see a familiar face again.

PS: This is my last blog in a „whole trip style“. For the 2 1/2 months in New Zealand I will for sure find another rhythm.

PPS: It took me a lot of nerves to finish this blog since iOS 11 and WordPress don’t work that well together.
PPS: I think I’ve been watched during my trip to Sydney. I can’t get rid of this feeling. 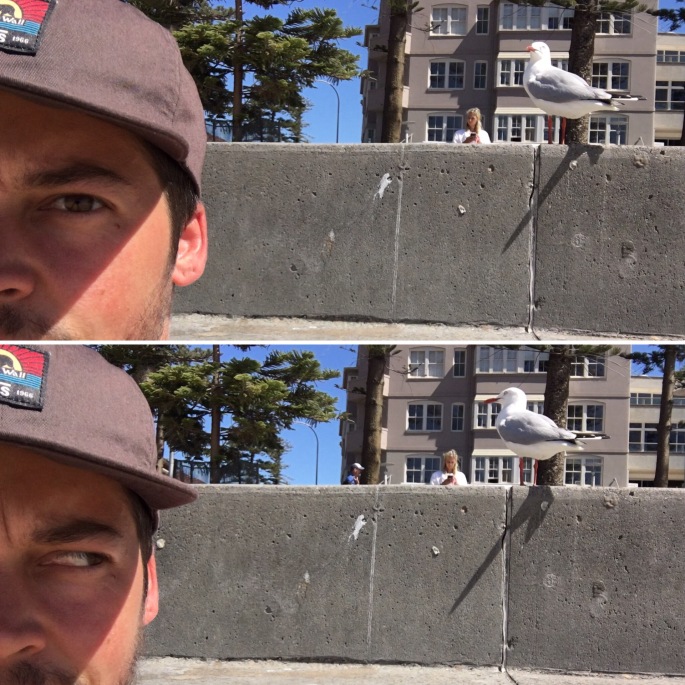 PPPS: And I reached ocean no. 3 – finally at the Pacific.

4 thoughts on “Sydney – or why I had no other choice”